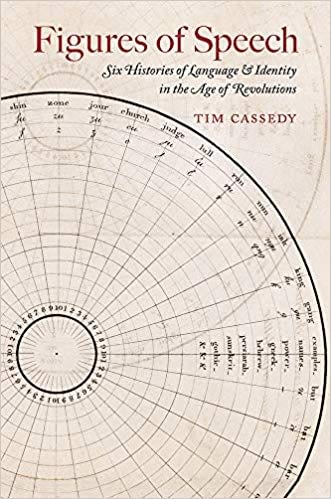 What if you could create a pronunciation guide to make speech more universal? What if a clock could teach us various sounds in our language rather than simply, “cuckoo-cuckoo?” Or, perhaps the United States should have its own unique language to really liberate itself from England. What about the effect of altering the appearance—or texture of the written word on paper? These are the kinds of questions that linguists were debating in the early 1800s, and they are some of the questions Tim Cassedy looks at in Figures of Speech: Six Histories of Language and Identity in the Age of Revolutions.

Cassedy introduces us to 6 people from very different backgrounds, born in 4 nations. They all had one thing in common—a passion for language. Each knew intimately that “language makes the difference between man and man.” The words a person spoke and the way they pronounced them could categorize that person and shape their life. But what if there was another way?

My favorite part of Figures of Speech was the chapter entitled, “Mary Willcock’s Caraboo Tongue.” In it, Cassedy shares the life story of a woman who used the “I don’t speak English” excuse to get out of legal trouble. She spoke a fake foreign language and found herself in far deeper than she ever imagined.

One of the most interesting things about Figures of Speech is how pliable and yet, enduring, the English language is. Many misconceptions (such as Noah Webster being lauded as the George Washington of the American lexicon in his day) were set straight. The author has included an abundance of images in Figures of Speech, to complement the text.

There were some parts of the book that were a bit slow and meandering, but on the whole, Figures of Speech was very interesting and thought-provoking. The Coda was a particularly good way to end the book. The only thing I found particularly aggravating was the host of formatting issues in the Kindle (mobi) format. The captions and footnotes were often in the middle of a random page, with no point of reference from which to connect them. Also, some of the unique images of text don’t translate accurately to the digital font, resulting in meaningless content that the reader can’t understand. I have seen the paperback format, though (thanks to the wonders of PDF) and it is absolutely stunning! I definitely recommend purchasing the paperback of Figures of Speech.

If you enjoy history, languages, and the interesting issues that surround evolving linguistics, this is a must-have book. Skip the Kindle format and invest in the paperback. The beautiful images in the book are worth it.

I give Figures of Speech 4 Stars!

Thank you, NetGalley and University of Iowa Press. They provided an ARC of Figures of Speech, in exchange for an honest review.

4 thoughts on “Figures of Speech : A Book Review”