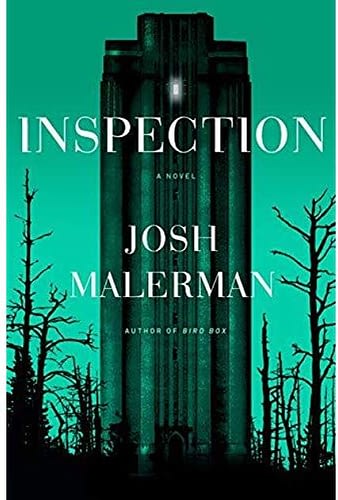 Imagine growing up, having never met someone of the opposite sex—in fact, never even knowing a gender besides your own exists. Would you have more focus? Could you achieve levels of success, unattainable when the distraction of attraction is there? That’s what The Parenthood is betting on in Josh Malerman’s latest novel, Inspection.

Inspection is a dystopian novel reminiscent of Lois Lowry’s The Giver and Hugh Howey’s Wool. Like all good dystopian novels, Inspection was very thought-provoking. As a parent of teenage girls, I’ve spent a lot of time questioning how much I should shield my daughters from certain things (boys included). The Parenthood is no different. Like The Parenthood, I also want to see my children achieve their maximum potential. But how far is too far to go to turn these dreams into a reality?

Josh Malerman wrote one of my favorite books: Bird Box (now a film starring Sandra Bullock). So I was excited to read his latest work. His writing is again, excellent, particularly his ability to give a unique voice to each of the characters in Inspection. I found that I could relate to all of them in some way.

The book’s pace was perfect. And although the scheme hatched by The Parenthood was complex, Malerman unfolded it in a way that was easy to follow. I was completely intrigued by The Parenthood’s idea to raise boys 24 boys and 24 girls separate from, and without any knowledge of, one another. Add to it the fact that they were just hitting adolescence, and I was hooked. After all, no one questions the rules like a teenager. It was also interesting to see how boys interact with one another and their world, vs. how girls do.

I thoroughly enjoyed Inspection throughout 90% of the book. Unfortunately, the ending took a turn that I didn’t see coming; one which I wasn’t comfortable with. It was so out of the blue, that I felt blindsided. I don’t wish to spoil the book for anyone who would like to read it, so I won’t go into specifics. I will say that the ending felt rushed. The actions of the Alphabet Boys and the Letter Girls were so completely out of character (especially considering how sheltered they had been throughout their lifetimes) that I found it difficult to believe.

I always disclose any language, sexual content, or violence, which might offend readers. There were a few instances of vulgar language, there was implied (but no explicit) sex, but there was a disturbing amount of graphic violence.

Until the last 10% of the book, I would have highly recommended it to anyone. The ending took away my ability to do so and turned a 5-star book into a 2 1/2-star book. Because the vast majority was wonderful, I am nudging the half star up,

I give Inspection 3 stars.

Inspection will be released on March 19, 2019.  It is currently available for pre-order.

Thank you to NetGalley for providing me with an ARC copy of this book in exchange for an honest review.

4 thoughts on “Inspection by Josh Malerman: A Book Review”