Local Authors to Have a Book Signing

Two authors from Blaine, Minnesota are having a book signing at the Northtown, Caribou Coffee to launch their just-released books, 10 AM to noon on Saturday, July 9th, 2016. Their books will be offered at special event pricing.

In 2012 Dan Erickson was diagnosed with stage IV lung cancer with a prognosis of 6 months. The former Pastor began writing ABC’s of the Bible: 200 Two Minute Lessons on the Basics of the Bible, after having to close Abundant Grace Fellowship, the church he pastored in Blaine, Minnesota, due to his illness.

Heather Erickson’s book, Facing Cancer as a Friend: How to Support someone who has Cancer, answers the question of what you can do to help the people in your life who are struggling with the deadly disease. With half of all men and a third of all women getting a cancer diagnosis in their lifetime. This book is a much-needed resource.

Heather Erickson is an author, writer, and speaker. Since her husband’s diagnosis, she’s focused her writing and speaking on helping cancer patients and their families advocate for themselves and live life to the fullest in spite of their illness.  She says, “My goal is to help people face cancer with grace.”

You can find out more at www.heatherericksonauthor.com

In 2012, Blaine resident Dan Erickson was given six months to live when he was diagnosed with stage 4 lung cancer.

Three years later, he is beating the odds.

Both Dan and Heather found time to write, each publishing a book this year.

Dan’s “The ABCs of the Bible” was released in April, and Heather’s “Facing Cancer as a Friend” came out last month.

“These are both our maiden voyage,” Dan said.

Dan’s health improved in early 2016, and he set to work on his book, wanting to leave a legacy for his children and grandchildren.

Several years ago, Dan served as pastor at Abundant Grace Fellowship in Blaine. The church shut down about six months after his diagnosis, but Dan continued to share the Word of God through his blog, “Dan’s Pulpit.” Some blog posts were incorporated into his book.

Each page focuses on a different word found in the Bible. Dan reflects on each word and shows how the Bible’s message can be applied to daily life today.

“I wrote a book; Heather’s an author,” Dan said.

Heather has always wanted to be a writer. She wrote a draft of a mystery novel, but put that on the back burner to write the “Facing Cancer” series while she is in the midst of doing so as Dan’s caregiver.

The Ericksons saw that cancer caused many friends and family members to pull away from them, not wanting to do or say the wrong thing.

Others jumped in with a slew of home-remedy cures and a desire to compare cancer stories, which, while well intended, are not helpful.

After a cancer diagnosis, people you think would be there for you aren’t, and others come out of the woodwork and surprise you with their tenderness and generosity, Heather said.

Her book is certainly shaped by her family’s experience, but it features short stories from others’ experiences with cancer as well.

It is geared toward the friends of those diagnosed with cancer and features chapters on being prepared, visiting, talking with a cancer patient, notes and calls, doing something helpful, errands and projects, bringing meals, gifts and caregivers and children.

“I want it to be very digestible,” Heather said.

The book urges people to use their own unique gifts to helped loved ones facing cancer. Not everyone is going to bring over a casserole when a friend is ill, nor should they. But someone might be able to stop over and mow the lawn or babysit instead. They might write a note or stop over for a visit.

“There’s just a zillion things that somebody can do,” Dan said.

Other books Heather is planning to write as part of the “Facing Cancer” series address cancer from the perspective of a parent, caregiver, Christian, child and patient, as well as a book specifically about the Erickson family’s story.

“My goal is to help people face cancer with grace,” Heather said.

Dan and Heather will be selling and signing their books at Caribou Coffee, 8601 Springbrook Drive, Blaine, July 9 from 10 a.m. to noon.

Event pricing means two books will go for $15 when normally they retail for $10 apiece.

Both books are available in paperback and for Kindle on Amazon.

Disclosure: Some of the links in my posts are affiliate links. At no additional cost to you, I may earn a commission when you click on the link and make a purchase.

Check out Past Blog Posts HERE 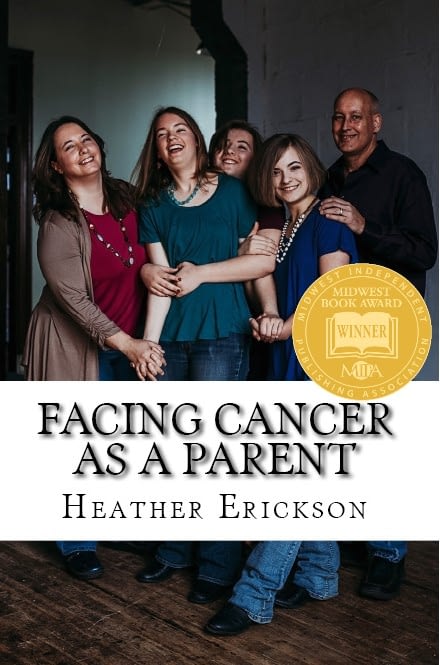 In order to control SPAM, I have turned off comments on posts more than 14 days old. Thank you for understanding.