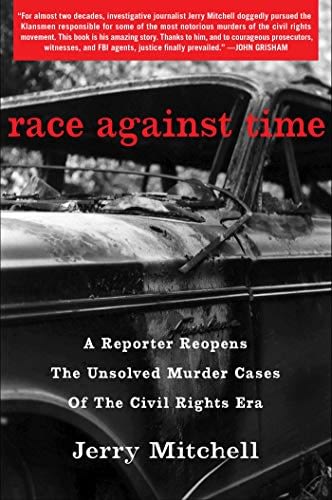 “Race Against Time: A Reporter Reopens the Unsolved Murder Cases of the Civil Rights Era” by Jerry Mitchell was a startling look back in history. Because of the terroristic threats imposed by the Ku Klux Klan, backed up with a willingness for violence and even murder, in the 60’s justice wasn’t blind. Some of the most notorious racially motivated murders in the south went unpunished until 2-4 decades later. Jerry Mitchell, a journalist for The Clarion-Ledger, played a huge role in getting these cases reopened and finding holes in the lies told by the suspected killers.

Cases that Mitchell covered in his paper…

…and then included in “Race Against Time” include:

In 1964, James Chaney, Andrew Goodman, and Michael Schwerner were working on the Freedom Summer Campaign, in an effort to help register African-Americans to vote. They visited a congregation of a church that had recently been burned in Neshoba County, Mississippi. They were then arrested after a traffic stop. When their family and friends didn’t hear from them after that, the FBI was sent in to search for them.

The murder of Medgar Evers:

When Evers took over the NAACP in Mississippi; his name began appearing on KKK “death lists.” On June 12th, 1963, he was shot and killed in front of his wife and children as he got out of his car after arriving home. It is in this case that we see just how deep the tentacles of racism reached in Mississippi.

The murder of Vernon Dahmer Sr.:

His murder and the firebombing of his home and business was another series of crimes for which justice was delayed. Dahmer was friends with Evers and joined the NAACP.

The bombing of the Sixteenth Street Baptist Church in Birmingham, Alabama:

Birmingham was nicknamed “Bombingham” because the KKK had blown up more than 50 African-American Churches, homes, and businesses. Perhaps the most famous church bombing in the history of our nation caused the deaths of 4 young girls.

Jerry Mitchell is not in a real race against time as he seeks to bring yet another former KKK member to justice after he had slipped through the law’s grasp not once but twice before. Meanwhile, witnesses are dying of old age and suspicious circumstances. The prosecution must try the case while there are still some witnesses alive!

“Race Against Time” was a reminder…

…of a time most people would like to forget but which is also essential to remember. The stories of life under the segregationist south are far more real than a dry history book. It is living history. We see this as we read about the process of working with the justice system in the last 2-3 decades. Time is ever-changing the political landscape, yet there are always people who refuse to change.

“Race Against Time” is the story of a journalist

Jerry Mitchell is a journalist who became very involved with his stories. I was amazed at the way people would open up to him—not just the families of the victims and the lawyers, but the members/former members of the KKK. And they knew that he was writing these stories and uncovering the truth. Because Mitchell is a journalist, his writing is moving and economical. He doesn’t drone on about things that aren’t necessary. Instead, “Race Against Time” is like a fast-moving train. Hop on and hang on!

I highly recommend this book to anyone who likes reading. It is a crime procedural, a biography, history, and mystery. “Race Against Time” will be released on February 4th, 2020. You can pre-purchase it now for immediate delivery when it becomes available!

I give “Race Against Time” 5 stars!

Thank you to NetGalley and Simon & Schuster for providing me with an ARC of “Race Against Time” in exchange for an honest review.

4 thoughts on “Race Against Time: A Book Review”