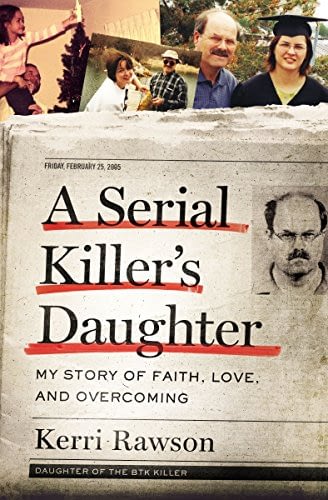 “A Serial Killer’s Daughter: My Story of Faith, Love, and Overcoming by Kerri Rawson is aptly named. The book isn’t about Dennis Rader (also known as BTK) the serial killer who terrorized Wichita, Kansas. It’s about his daughter and her process of recovering after the trauma of learning that her father was BTK. This might sound like semantics, but for me, it made the book an exceptional read. It’s not for gawkers who want an eye full of the gory details of BTK’s crimes. It is a story of recovery, forgiveness, and the immeasurable grace of God.

…was an adult, newlywed when she learned that her father was the man who committed the crimes that gave her nightmares, growing up. When she learned that she was a notorious serial killer’s daughter, all of her memories of the man she called “Daddy,” were tainted. She was left with a million questions without answers. The media circus only added to the pain.  Her father left 7 families, directly victimized by his crimes. Karri’s family was the 8th and final family lain waste by BTK.

“A Serial Killer’s Daughter” is her response.

It is her testimony. It is difficult to imagine what it would be like to learn your father is a serial killer. But many people understand the pain of betrayal, grief, and trauma. It is that common ground that makes Karri’s story so important. Her story also shows that there is so much more than a flashy headline when tragedy strikes a community. The casualties aren’t always who you expect.

I read “A Serial Killer’s Daughter” knowing nothing about BTK other than his name. I still feel like I know little about him, but I know something more important. As a Christian, this book both encouraged and challenged me. It’s wonderful to hear about the power of God to heal even wounds as deep as those experienced by Karri and her family. It isn’t so easy to forgive, to do the hard work of going back to the source of the pain and trying to do the right thing, even when it is the hard thing, the seemingly impossible thing. Yet, somehow, that is what Karri attempts to do.

I was fascinated and touched by her story and the direct way she tells it.

She includes many of the letters exchanged between her father and her. I was surprised by the feelings they sparked. She doesn’t give a polished version of her life’s story, but the real, often messy one. Isn’t that how all of our lives are? There was such authenticity about it. This book felt a lot like a diary at times, organized by month and year.

There was neither vulgar language nor any explicit descriptions of BTK’s crimes.

I give “A Serial Killer’s Daughter,” 4 stars!

Thank you to NetGalley and Thomas Nelson for providing me with an ARC of “A Serial Killer’s Daughter” in exchange for an honest review.

4 thoughts on “A Serial Killer’s Daughter : A Review”