T is for Trust Your Intuition

About 12 years ago, I was in the market for a new vehicle. I was newly separated from my ex-husband and a little overwhelmed by the car-buying process. I had done my research, though, and found a few candidates online. One of them was advertised wrong. When I called the number in the ad, I got a New Hampshire car dealership rather than the dealership right down the road in our Twin Cities suburb. Hmmm. My intuition told me I could get  good deal on this van.

I quickly went down to the local dealer who actually had the minivan.  When I asked about the ad, they looked into the matter. “No wonder no one has been calling on the ad,” the salesman let slip.

I test drove it and was very pleased with the vehicle.

“I will take it for $3,000—total. That must include tax, license fees, etc. It’s all that I have.” The salesman told me that was impossible. The price was firm. I nodded regretfully, pulling out my high school theater experience. “That’s unfortunate,” I said. “I can’t pay what I don’t have. And I got up to leave, walking out the door without looking back.

When I was almost to my own car, the salesman rushed out of the dealership doors. “Wait!” He called out. I turned my head to see what he needed. “I just spoke to my manager. He may be able to give you a deal that I’m not authorized to make.” Long story short, I got my price. The dealership only made $38 on that van but needed to move it. It had already been on the lot, far too long, thanks to the snafu with the advertisement.

Following your intuition comes more easily to some people than others.

My friend took more than a year to buy his SUV and thought it was crazy for me to make such a big purchase so quickly. I knew that if I did wait, ignoring my intuition, I could end up losing the van to another buyer. After all, they would fix the ad and soon, other offers would come in. That van was one of the best purchases I’ve ever made and it gave me a needed confidence boost as I ventured into life as a single mother.

Trust your intuition with people.

Your intuition is like a built-in radar device that warns you in a split second that something isn’t right. All too often, people ignore their intuition. They learn from a young age to be polite, often, sacrificing the greatest protective gift they’ve been given.

I ignored my intuition for over 2 years when it told me that my ex-husband was having an affair.  Was extra foolish because other people could see it, too, but I didn’t want to believe it. If I did, I would have to do something about it. Two years later I was ready to know the truth. He had been having multiple affairs. He’d hidden other dangerous, addictive behavior, as well. I tried to work it out with him, but there was no working that out. I felt incredibly foolish. The truth is that I knew the truth all along. I just wasn’t emotionally able to deal with it.

What is Your Intuition?

You take in conscious information every day (ironically, without even realizing it). Odd behavior, for example, can tip you off that something isn’t right, and you should avoid the person. It’s like when the weather suddenly turns, you aren’t a meteorologist, but you notice it immediately; the green colored sky and the wind that suddenly picked up. You know it’s time to head home. That’s because the information you’ve taken in through your senses is processed and picked up by your concious mind. In fact, it’s a heightened awareness of the things you didn’t realize you noticed. 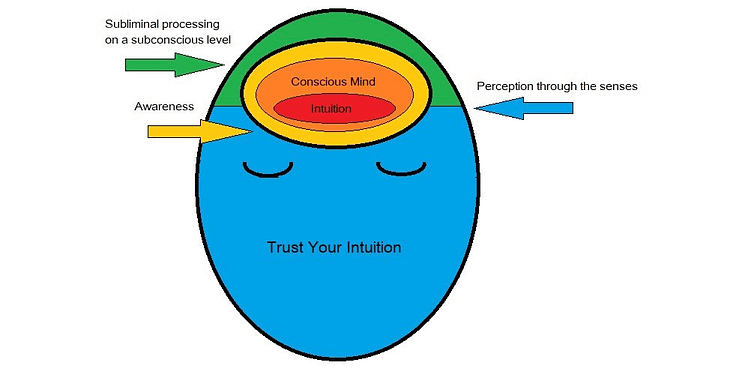 Unfortunately, far too many people ignore their intuition at their own peril. They don’t want to be rude or seem prejudicial. Yet, the guy that gives you’re the creeps (whether he’s a creepy stranger or a creepy uncle) could be a predator. The countless clues he’s dropping are picked up by your subconscious. You get a strange feeling in your gut—which by the way, scientists now know is attached to your brain.[1] Do you second guess yourself, or do you trust your intuition? Always, always, always trust your gut. You will likely never know if what could have gone wrong, would have, had you ignored the warning signs, but it’s always better to be safe than sorry.[2]

I’m doing double duty this month during the A to Z Blogging Challenge. Here at Heather Erickson Author/Writer/Speaker, I will share ideas for “Thinking Creatively.” I’ll also be doing the challenge at Facing Cancer with Grace, where I will focus on “Avoiding Burnout.” I hope you’ll visit me at both sites. While you’re here, sign up for my email list. Today’s post is T is for Trust Your Intuition

“Intuition is the wisdom formed by feeling and instinct — a gift of knowing without reasoning,” says top businesswoman Angela Ahrendts.

As such, your intuition can hold a wealth of insight and surprising ideas if you’d only stop and listen to it. Think of a challenge you’re facing and the ideas you’ve generated. What does your gut feeling say? Do you trust your intuition? How has it helped or harmed you in the past?

[1] Underwood, Emily, et al. “Your Gut Is Directly Connected to Your Brain, by a Newly Discovered Neuron Circuit.” Science | AAAS, American Association for the Advancement of Science, 26 Sept. 2018, www.sciencemag.org/news/2018/09/your-gut-directly-connected-your-brain-newly-discovered-neuron-circuit.

20 comments on “T is for Trust Your Intuition”

I agree with this Heather – I think it’s very important to trust your intuition. And while it’s true, some people find it easier than others, such guidance is available to us all. I think it would be hugely helpful if this truth were taught early and reinforced by practice, and we got rid of all the societal messages that teach us to be ignore our inner knowing in favor of politeness and/or expectations.

Hi Deborah, I have raised 3 daughters and have taught each of them to trust their intuition. Yet, they still hesitate. I don’t know what it is that prevents girls from taking a stand immediately. So I continue to remind them, and anyone who will listen. Trust your intuition. Have a wonderful week!

Glad you got the van. Trusting one’s own instincts can be hard when one’s been lied to a lot. You start to doubt yourself.

Hi Liz. I know that well. After my ex-husband had multiple affairs on me, I was so angry with myself for trusting him. What was wrong with my judgment that I couldn’t see? Eventually, I learned that it wasn’t me, but him, with whom something was wrong. It helped that I eventually met and married my husband who loved me so well. It certainly is a hard thing to get over, though.

Spot on. I am trying to reaffirm myself when my intuition is accurate, and practice trusting it more.

Hi Beth. I’m glad to hear it. It really can take some practice, and it is often so easy to let self-doubt creep in. Well done!

I once talked myself out of trusting my gut because I thought it was my anxiety overreacting… (anxiety disorders make it hard to trust your intuition) – and then my intuition turned out to be right. Now I know to trust my gut more… but I also have more anxiety. Life is not easy 😀

Hi Tarkabarka. You bring up an excellent point about anxiety making it difficult to trust your gut. I don’t know the answer to that (and I wish I did because I have a daughter who struggles with anxiety). I think that even our intuition is based on something (someone behaving oddly or something out of place). Tracing the root of the feeling may help, but I’m no expert. Best wishes to you!

Thank you, Fredrique. At least we have 11 months to do the road trip, instead of one. 🙂

I think that trusting your intuition is generally a good thing and you certainly make an excellent case for it. My wife is a cancer survivor so I will be checking out your 2nd blog as well.

Thank you, Dave. I really love all of the Sherman Brother’s song you shared during A to Z. They really take me back to my childhood.

Great Post! Just stopping by from the AtoZChallenge Road Trip 🙂

Thank you, NotesinaBook. I will have to peruse your blog a bit more. I love different kinds of paper and journals Have a wonderful week!

This is such a great post. Stopping by from #A2ZChallenge Road Trip.

Thank you, Ruchi. I loved your reflections on the A to Z and found I could really relate to them. Have a great week!

Hi Heather. Stopping by from the A to Z Road Trip. Surprised that more people have not participated in that this year. Anyway, love this post about intuition. Glad you got your vehicle. Being firm with car dealers is really the key, isn’t it? Cute picture of your family. Have a wonderful weekend!

Hi Janet. You are right. So few people signed up this year. Really different than in the past. You have a wonderful weekend, too!

Hey! Nice post! So glad I stopped by your blog.
Where do you get your inspiration from to write such informative posts?

Hi ELTEC. I read a lot about creativity and how to be open to inspiration. Then I research topics that would be helpful to my readers. Best wishes in 2020!