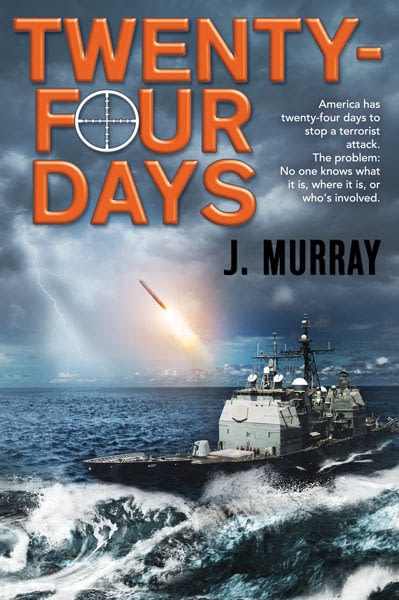 Less than a year ago, author, Jacqui Murray’s book, To Hunt a Sub, made its debut. She’s  now releasing the sequel, Twenty-Four Days. I’m so excited to share this with you as part of her book release blog-hop.

A former SEAL, a brilliant scientist, a love-besotted nerd, and a quirky AI have twenty-four days to stop a terrorist attack. The problems: They don’t know what it is, where it is, or who’s involved.

What sets this story apart from other thrillers is the edgy science used to build the drama, the creative thinking that unravels the deadly plot, and the sentient artificial intelligence who thinks he’s human.

An unlikely team is America’s only chance

World-renowned paleoanthropologist, Dr. Zeke Rowe is surprised when a friend from his SEAL past shows up in his Columbia lab and asks for help. Hijackers have taken two submarines and Rowe might be the only man who can find them.

At first, he refuses, fearing a return to his former life will end a sputtering romance with fellow scientist and love of his life, Kali Delamagente. But when hijackers kill one of his closest friends, he changes his mind. He asks Delamagente for the use of her one-of-a-kind AI Otto. Otto possesses the unique skill of being able to follow anything with a digital trail.

In a matter of hours, Otto finds one of the subs.

But the second, Otto can’t locate.

Piece by piece, Rowe uncovers a bizarre nexus between Salah Al-Zahrawi–the world’s most dangerous terrorist and a man Rowe thought he had killed a year ago, a North Korean communications satellite America believes is a nuclear-tipped weapon, an ideologue that cares only about revenge, and the USS Bunker Hill (a Ticonderoga-class guided missile cruiser) tasked with supervising the satellite launch.

And a deadline that expires in twenty-four days.

As America teeters on the brink of destruction, Zeke finally realizes that Al-Zahrawi’s goal isn’t nuclear war. Rather, it’s payback against the country that cost him so much.

This is the second book in a series, so I asked Jacqui,

Do you have to read To Hunt a Sub (the prequel) to understand this book (the second in the series)?

She said, “No, not at all. The plots are stand-alone and the characters interact based on what happens in this story, not prior ones. There is sufficient backstory to cover any instances where that is not true.”

What does Kirkus Reviews have to say abut Twenty-Four Days?

A blistering pace is set from the beginning: dates open each new chapter/section, generating a countdown that intensifies the title’s time limit. Murray skillfully bounces from scene to scene, handling numerous characters, from hijackers to MI6 special agent Haster. … A steady tempo and indelible menace form a stirring nautical tale

The research and technical details she included in this book had me in complete awe. A cybervirus is crippling submarines–and as subs sunk to the bottom of the ocean, I found myself having a hard time breathing. It’s up to Zeke and Kali to save the entire country using their brains. If you love thrillers, this is definitely one you can’t miss!

Cover by: Paper and Sage Design

Jacqui Murray is the author of the popular Building a Midshipman, the story of her daughter’s journey from high school to United States Naval Academy, and the thrillers, To Hunt a Sub and  Twenty-four Days. She is also the author/editor of over a hundred books on integrating tech into education, adjunct professor of technology in education, webmaster for four blogs, an Amazon Vine Voice book reviewer,  a columnist for TeachHUB, monthly contributor to Today’s Author and a freelance journalist on tech ed topics. You can find her books at her publisher’s website, Structured Learning.

I am an author, writer, and speaker and homeschooling mom of 3. My husband, Dan has battled stage IV lung cancer since 2012. I help cancer patients and their families advocate for themselves and live life to the fullest, despite their illness.

My book Facing Cancer as a Friend: How to Support Someone Who Has Cancer, is available on Amazon.com.