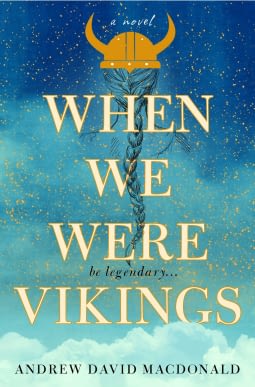 “When We Were Vikings,” by Andrew David MacDonald is one of the most engrossing books I’ve read in a long time—and I read a lot of good books. I requested the book, expecting something a bit more innocent, like the main character, Zelda, from whose point of view the story is told. But for all of Zelda’s innocence, she is living in a very dangerous world, one that she is ready to embark upon as an adult—as a Viking.

Zelda is an intellectually impaired woman who is obsessed with Vikings. When she finds out that a woman can also be a Viking warrior, she decides it’s time to be her own legend.

There is such a tenderness and a loyal bond within Zelda’s “tribe.” Her family isn’t traditional. Zelda’s older brother, Gert, and his on-again, off-again girlfriend, AK47, look out for Zelda. But in many ways, it is like the best of families where love and sacrifice are offered up freely for the good of the others in the tribe.

“When We Were Vikings” was a joy to read.

The author was able to capture the voice of this young woman in a way that was real and honorable. In fact, the dialogue of all of the various characters is what really made this story ring true. Zelda is the filter through whom the story comes to us. She tells us what is happening in her world, as she sees it. Although her naiveté might make her account unreliable, her absolute honesty and the openness with which she tells the story lets us in on every detail, enabling us to know things that she is missing because of her intellectual impairment.

In “When We Were Vikings,” the author portrayed the intellectually impaired characters realistically. They weren’t stereotyped or one-dimensional. They had hopes and dreams, fears and feelings, like everyone else. I will be looking for more from this author in the future.

Normally, I don’t typically read books with a lot of coarse language or sexual content. But, in this case, it was merited. Zelda is trying to figure out who she is and often speaks in the way the people in her community do. Parts of the book could definitely use a trigger warning for people who have been abused in any way.

I highly recommend “When We Were Vikings,” and give it 5 stars!

“When We Were Vikings” is available for presale and will be delivered January 28, 2020.

Thank you to NetGalley and Gallery/Scout Press for providing this book in exchange for an honest review.”

I’d love to hear them in the comment section, below. I appreciate my readers as well as the writing community. To show that appreciation, I use Comment Luv. Just leave a comment below and your latest post will get a link next to it. Thank you!

2 thoughts on “When We Were Vikings : Book Review”