A is for: Challenge your Assumptions

I remember the week before I started art school. At age 16, I had just moved into the dormitory where I would live Monday through Friday, and then go home for the weekends. I soon made a few friends. The art school was no different than other schools in the way that students quickly clustered into cliques. There were also some outcasts, about whom, assumptions were made. One of them was a guy named Rikk.

Alright, that was the first problem.

He spelled his name with 2 Ks which came off as trying too hard to be cool or unique. It seemed fake. So people called him Rik-k-k-k-k. Apparently, he also liked the ladies, but the ladies thought he was a little creepy. They all told me so. He was clingy. He also had a mullet long after they went out of style. There were so many things that one could say about Rikk—and they did.

Unfortunately, I was soon saying them, too. I believed all the gossip. So when he approached me one day, I quickly and harshly shut him down.  As I returned to my dorm room, my smugness turned to shame. I was really mean to him and I didn’t even know him. I just make assumptions based on things other people had been saying. That feeling wouldn’t go away until I made it right. The next day, I sought him out.

I needed to challenge my assumptions, head-on.

It was difficult to swallow that humble pie, bite by bite, but it was worth it.  I told Rikk I was sorry; that I wasn’t normally the kind of person who would treat someone that way. I should have gotten to know him rather than making assumptions about him. I asked him if he would forgive me. He did and we became fast friends. In fact, he became one of the best friends I had during my 2 years there.

Years later, I got a phone call.

Rikk was living up in northern Minnesota. He’d had a severe brain injury and was trying to piece his life back together. He struggled to recall a lot of his life but he remembered me. He drove all the way to my parents’ house to see me. They gave him my number. I was glad that I questioned my assumptions when we first met. I think if there was more of that in the world, we wouldn’t have near the divisiveness that we have now. But it can start with us each, individually. 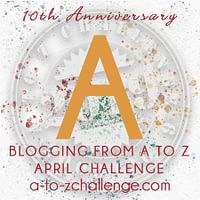 I’m doing double duty this month during the A to Z Blogging Challenge. Here at Heather Erickson Author/Writer/Speaker, I will share ideas for “Thinking Creatively.” I’ll also be doing the challenge at Facing Cancer with Grace, where I will focus on “Avoiding Burnout.” I hope you’ll visit me on both sites. While you’re here, sign up for my email list. Today’s post is A is for Assumptions.

You may wonder what challenging your assumptions has to do with thinking creatively. In order to gain real insight and inspiration, it’s essential to be willing to question your assumptions, so you don’t miss out on a possibility that you might otherwise dismiss.

Think about a challenge you’re facing.

14 comments on “A is for: Challenge your Assumptions”

What an amazing bit of your life. It’s those types of experiences that help us learn who we are. I’m so glad you had a chance to undo what you’d done first with Rikk. That isn’t always the case and then, one is simply haunted by it.

Hi Jacqui. I am too. He turned out to be a great friend. We miss out on a lot when we assume things. 🙂

An inspiring post, and a gentle reminder that assumptions often lead to dangerous conclusions. I look forward to a month of lessons in creative thinking.
https://gail-baugniet.blogspot.com/

Hi Gail. I’m looking forward to more of your short stories, as well. Happy A to Z!

Hi Liz. I still remember feeling so ashamed that because of my assumptions, I had temporarily looked down my nose at someone. I didn’t like myself at that moment. Happy A to Z!

What an insightful post! Yes it is true we assume based on prejudices, social standing, dressing sense, language and whole lot of other things. We are not even aware of those assumptions. But even we are being subjected to those assumptions by others too. It is a vicious cycle. To break away from these shackles requires an openness of mind and being welcoming to new ideas everyday.

I am glad I stopped by.

Thank you, Meena begin to see the greater truth. it is so important to look more deeply into the people we meet and the situations we encounter from day to day. Only then can we hope to be fair-minded. Thank you for visiting!

Pretty sure I’ve had more assumptions made about me than I have made about others. I’m more the Rikk, except for the ladies… then again, most of my friends were girls, so maybe people thought that too. (At least one guy did, which really was unfortunate for me.)

Glad you were able to look past rumors and think for yourself.

Hi J. Lenni. Too often we miss out on a good friendship because of assumptions. I nearly did. I’m glad my conscience steered me in the right direction. I think at some time or other, we have all had assumptions made about us. It’ an unfortunate shortcut people take…putting people in boxes so we don’t have to do the work of really getting to know them. I’m glad you stopped by. 🙂

What a fantastic opportunity to share in someone’s life. I try not to make assumptions based on first impressions, but sometimes, it is hard.

Hi Patti. It can be hard to avoid making assumptions, completely. I think the main thing is that we shouldn’t act on them. Instead, we should gather more information to decide whether or not our assumptions are correct or not. There are exceptions to this, of course, especially when it comes to keeping yourself safe. Have a wonderful day!

Absolutely right, and something I hadn’t thought about in the context of thinking creatively. Naturally as a writer, if one can only see a situation through the lens of one’s own assumptions, how will one ever create a diversity of characters who ring true? I always try to challenge my students’ assumptions, but tend to have a blindspot when it comes to my own. Thank you!

Hi Josna. When my kids were really little, each Wednesday I would drive past a McDonald’s on the way to church. My 4-year-old would always say, “Look at all those people in the McDonald’s drive-thru.” Every time, I would immediately respond, “We’re not going to McDonald’s.” She would immediately drop the subject. After about a month of this, I grew frustrated with her tactics. “We’re NOT going to McDonald’s, so stop hinting.” Then she set me straight. “Mommy, I don’t want to go to McDonald’s. I want to OWN a McDonald’s. They must be making a lot of money with all of those people eating there.” I was assuming she wanted what all kids want–a Happy Meal. But what she really wanted was what most adults want–a lot of money.” She is still seeking success today. We all tend to make assumptions. Hopefully, we can make fewer tomorrow than we did yesterday. Have a great week.